We live in a fantastic time – a flood of innovations, improved technologies and many new approaches for production systems meet a rapidly increasing product and process complexity, increasing variety, shorter product life cycles as well as global and above all volatile markets. The challenge obviously lies only in the implementation of the concepts and strategies that research has produced. One of the main areas of research is the adaptable factory, whereby the adaptability aims at adapting the production system to future, often still unknown requirements. This demand presents companies with complex, investment-intensive manufacturing processes with major challenges. After all, it is a question of saying goodbye to the idea of a “smooth, stable running process” and allowing a degree of flexibility that is tantamount to a permanent ramp-up process.

For such fundamental adjustments of the production systems, detailed planning under imaginable scenarios and their evaluation in a simulation is indispensable. Simulation is thus increasingly becoming a key technology in the planning of production processes. After all, it is the only way to make complex relationships transparent and to objectify the quality of a solution in concrete measured values. Various scenarios, even seemingly unreal, can be run through in order to put the logic of the process through its paces, sound out the limits of performance, uncover potential weaknesses and compare alternative solutions.

It is not surprising that the German automotive industry took up the challenge of adaptability even before Industry 4.0 started. The research focuses primarily on car body construction and assembly. Audi began to think about new assembly concepts with the assembly of the first R8 generation and is now predicting the dissolution of the rigid assembly line. The Ingolstadt-based carmaker summarizes the idea of a flexible assembly process under the term “modular assembly”.

The company FL Technology GmbH from Darmstadt has developed a technology within the framework of European and national research projects that allows the transport of any components via so-called movers. These movers are metal plates on rollers that can be moved by means of magnetic fields. This technology, known as “fluid logistics”, can revolutionize the assembly processes in an automobile plant. One only has to imagine that each individual part to be assembled moves independently to the respective installation location with thousands of objects simultaneously. While the linking of workstations with a rigid conveyor system permits almost no process changes, the sequence of the work steps as well as the linking of stations with parts and work equipment can be modified based on fluid logistics.

Various OEMs have become aware of this technology in the meantime. First pilot projects have been started to test the applicability and robustness in a test environment. This was preceded by investigations of the processes and dependencies in the supply of assembly lines. Based on the analysis of the actual process, a target concept for the application of fluid logistics was developed. One of the concepts, for example, turned the picking of individual parts for a shopping basket upside down. Instead of the order picker walking through several rack aisles to pick the required parts, the racks were placed on movers in order to be able to drive them to the order picking stations as required. Of course, this process changeover was first examined in a digital twin of the real process, a simulation model. Real production data was used to ensure comparability with the actual process. This means that in the first step, the simulation mapped the existing process in order to simulate the target process with exactly the same data and parameters. It quickly became clear during the development of the concept that the variety of possible solutions as well as the control strategies resulting from the high flexibility were not easy to develop. However, the economic efficiency could be significantly increased by adjusting the control parameters over several optimization stages.

Especially when it comes to new, innovative processes, the results from the simulation experiments are indispensable decision support, since only a small amount of practical experience is available. In the project example described, it could be shown that this conversion would save about 50% space and a good third of personnel. The adaptability could be implemented without restrictions. Both changes in the range of parts and an increase in the number of units are possible. The highlight: up to a certain limit, the control software can take the adjustments into its own hands.

Of course, these savings cannot be transferred 1:1 to the project examples of the assembly line, since the requirements for the assembly supply are mainly in the right sequence. Even the short-term adaptation of sequences is no obstacle for fluid logistics due to the high degree of parallelism. However, it is clear that requirements such as skipping workstations with optional assembly contents, dynamic allocation of buffers or production program-dependent configuration of workstations can be implemented. In addition, the complex line balancing and order sequencing can be put to the test, since the fixed linking of workstations is no longer mandatory. The logistics process can be made more dynamic, since transports based on fluid logistics do not generate any additional personnel requirements. Overall, one can assume a reduction in inventory and considerable space savings.

The question arises as to exactly what such a concept could look like and which control strategies could be used to get such a flexible process under control. This is where simulation comes into play again, because as already explained in the project, concept development will be based on a step-by-step optimization in the model. Technology and concept ideas are on the table. In the next step, the simulation will show how versatile the assembly can be.

What is Fluid Logistics?

This technology uses the functionality of magnetic fields to move objects in space without restrictions. For this purpose, the conventional floor in existing or new buildings is covered with the “planar units” shown in Figure 1.

Together with the movers, which are equipped with different roller concepts depending on the application, fluid logistics enables the unrestricted movement of countless objects at the same time. How and where the movers move is coordinated by a specially developed control software.

All that is needed for the use of fluid logistics are the scalable planar units and the customer- and application-specific movers. The area can grow with your requirements in a short time. Thus, maintaining system capacity for future planned growth is history. By combining several movers, different load carriers can also be handled on one system. In contrast to driverless transport vehicles (AGVs), the transport platforms do not require their own drive. They are therefore maintenance-free, apart from mechanical wear. The excellent capabilities in terms of sorting, sequencing and storage of goods clearly distinguish them from AGVs. Thanks to fluid logistics, any good can be moved at any time. This allows sequences to be formed efficiently, sorting to be carried out and these to be adapted at short notice by parallel movement. In addition, the use of fluid logistics means that no traffic routes are required in the warehouse. The share of routes can be significantly reduced by moving other shelves as required. 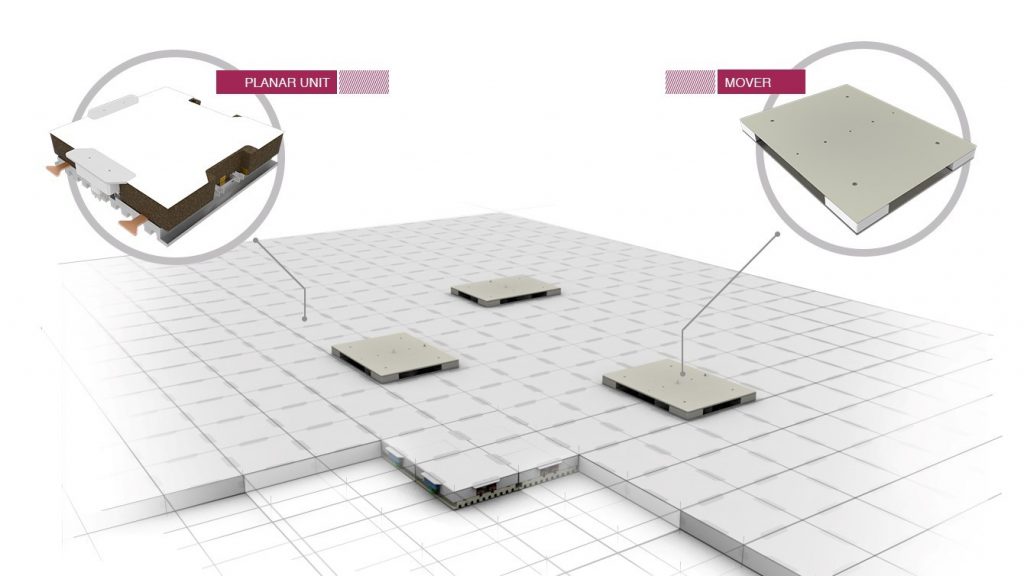