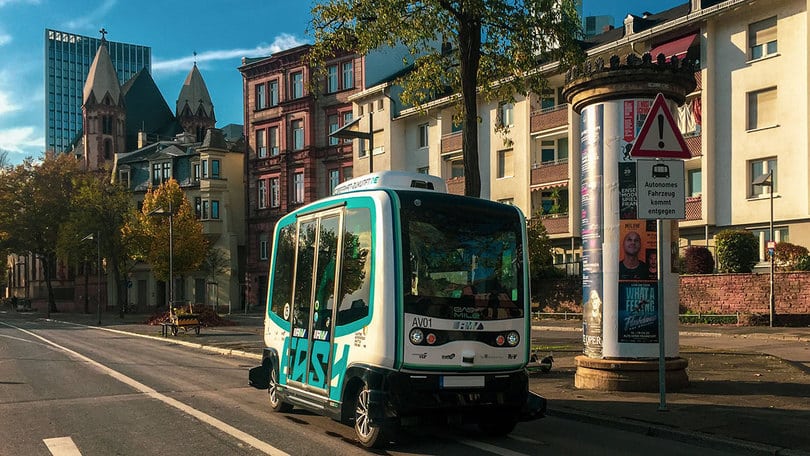 Autonomous shuttles could offer new opportunities to make rural areas more attractive for more people to live in – at the same time, however, economic viability must be ensured.

Researchers at the Frankfurt University of Applied Sciences (Frankfurt UAS) and the Hannover University of Applied Sciences and Arts (HsH) analysed how this can be achieved, for example, through the combined transport of people and goods, in the Kombinom research project. The aim of the research project Kombinom_2 (“Simulation as a decision support system for the use of autonomous minibuses in rural areas for the combined transport of people and goods”), which now follows on from this, is to develop a simulation application for the introduction of these autonomous, combined shuttles. This is being carried out by the Research Lab for Urban Transport (ReLUT), the Frankfurt UAS and the DAS HUB of the HsH in cooperation with SimPlan AG, Senozon Deutschland GmbH and tbw research GesmbH. The project Kombinom_2 is funded by the Federal Ministry of Transport and Digital Infrastructure as part of the mFUND innovation initiative with a total of around 1.6 million euros.

In the project, scenarios for economic, temporal, legal, spatial and social target variables are being investigated and real-life use cases of the joint transport of people and goods are being tested. In particular, the researchers use existing data sources and generate a new, spatially transferable data and decision basis. In various scenarios, the convergence of logistics and mobility will be analysed and further developed in order to create economic, ecological and social added value and to increase the quality of life in rural areas.

The planned project result is a simulation-based decision support model (EUM). The EUM serves as a basis for potential implementation projects, with which new offers can be designed by municipalities, districts and market participants and quantified on the basis of sustainability-relevant target values. A rapid implementation of pilot applications is also significantly facilitated.

In contrast to previous projects of this kind, Kombinom_2 focuses on the conceptual development and simulation-based decision support of an autonomous, combined transport concept for mobility and goods flows (convergence of mobility and logistics). In this context, the simulation application in whose development SimPlan AG is significantly involved offers an effective and resource-efficient possibility to develop and virtually test combined transport models and concepts.

You can find out more about the Kombinom_2 research project here.